Geocomp's resonant column and torsional system is based on the Long-Tor Resonant Column Apparatus developed by Dr. Vincent P. Drnevich (patent 1974) at Purdue University. The LoadTrac II/FlowTrac II RC-TS system is a fully automated system designed to measure the shear modulus and damping of soils at strains down to 10-7. The unit completely automates saturation, consolidation, resonant column, torsional shear, and stress-path test phases. The system consists of a computer-controlled unit that utilizes an oscillator motor to apply cyclic torsional loading to the top of the specimen for a range of excitation levels. Unlike other systems, a direct torque measurement is made at the bottom of the specimen to completely eliminate issues of back emf. Resonant column and torsional shear testing can also be followed by a stress-path triaxial test. The system is capable of displaying the current status of a test and graphically portraying the progress of the test in real time. 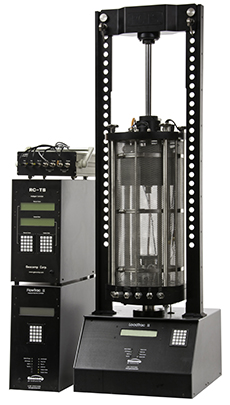