Routine estimations of stiffness have traditionally been made in a stress path triaxial apparatus; however, low-strain testing is difficult due to insufficient resolution and accuracy of load and displacement measuring devices. The WaVeMe/P and S wave testing system makes the measurement of soil stiffness at very small strains easy. It consists of piezo-ceramic plates, known as P and S sensors, which operate in the same way as bender elements. The system is used to measure compression wave (VP) and shear wave velocity (VS) of a specimen. Each testing system comes equipped with combined pairs of piezoceramic plated P and S sensors - one serves as the output (or source) signal and the other receives the signal (or input). 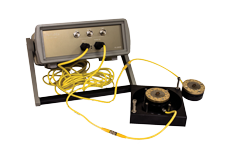